PHOENIX, AZ--October 8, 2020--(GLOBE NEWSWIRE) --Tombstone Exploration Corporation (OTCQB: TMBXF), a fully reporting U.S. based mining company, announced today in combination with Goldrock Resources Inc. and the Bonanza Mining Company that the construction phase is moving smoothly. The project is on track for the complete build-out of the heap leach pad and pond and install of liner and production equipment at the Bonanza Harquahala Gold Mine in La Paz County, Arizona for early November 2020.

The pad earthworks were completed in the third week of September ahead of schedule with the liner install to start on October 12.  The plastic liner material has been delivered to site in preparation for the install with all liner welding equipment and personnel to mobilize this week.  Engineers reviewing the liner install will also mobilize for an October 12 start.

The carbon columns have been refurbished and are being shipped to site for a delivery of mid-October.  All pumps and pad piping including drippers and valves have been ordered and have been delivered or being delivered by mid-October.

A gravity survey is being completed to identify the final water well location.  The survey will be completed by October 8 and water well drilling will commence thereafter.

5D Mining and Construction, the Company’s earthworks contractor, also completed installing the initial roads and the crusher pad and will be ready to mobilize the crusher near the third week of October.  The crusher and agglomeration facilities will take approximately one week to set-up with crushing expected to start towards the end of October depending on liner placement.  5D has also completed the carbon column pad location and the cyanide tank location. The tanks are being delivered.

Bonanza has also contracted with Drake Cement to provide agglomeration cement and are finalizing a cyanide contract with Cyanco to provide cyanide and a tank by the end of October.  All other chemicals and carbon are being purchased for an end of month start-up.

The BLM Lake Havasu Field Office recently completed an Environmental Assessment (EA) on the Bonanza Mine and stated the following:

“The Bonanza Mining Company plans to recover minerals from the tailings under their patented mining claim. The EA evaluates the potential impacts from the removal of scattered tailings and other metal bearing materials located on public lands managed by the BLM. Mineral recovery stimulates economic growth by providing the raw minerals needed in production of items we use every day.”

“The Harquahala Mine project, with the incorporated environmental protection measures, demonstrates BLM’s commitment to facilitating responsible mineral development in Arizona.  We also expect that this project will help sustain jobs at the mine and support local economy.  The Bonanza Mining Company Bond for this project was recently paid to the BLM in the amount of $101,523.00.”

Todd Fayram, Construction Manager, stated, “It looks like everything is on schedule for early November start-up of production.”

Alan Brown, Tombstone Exploration CEO and President, stated, “The most important part of the construction build out is the install of the liner and geonet along with all installation of equipment to specific design and all environmental assessment standards.  We expect our first carbon will be ready to ship for gold processing in early December.”

The Bonanza Mine property includes the Harquahala and Golden Eagle mines, located approximately eight miles south of Salome, Arizona.  The project totals 2,656 acres and has significant underground workings.  Once leaching has started, bi-weekly delivery of the carbon to a designated gold processing facility is expected.  Based on past metallurgical testing, production is budgeted at 23,000 ounces of gold from first phase of production.

Heap leaching is an industrial mining process used to extract precious metals and other compounds from ore using a series of chemical reactions that absorb specific minerals and re-separate them after their division from other earth materials.  Similar to in situ mining, heap leach mining differs in that it places ore on a liner, then adds the chemicals via drip systems to the ore, whereas in situ mining lacks these liners and pulls pregnant solution up to obtain the minerals. Heap leaching is widely used in modern large-scale mining operations as it produces the desired concentrates at a lower cost compared to conventional processing methods such as flotation, agitation, and vat leaching.

Tombstone Exploration Corporation is a gold, silver and copper exploration & mining company based in Phoenix, Arizona. The Company’s goal is to maximize shareholder value through focused exploration, testing and development of high-quality mineral targets in the prolific mineral producing areas in the Southwest United States. This goal will be achieved through the application of the best mineral exploration practices and techniques available, including the adherence to the highest possible standards of corporate responsibility, governance and conduct.

This release contains statements that constitute forward-looking statements within the meaning of Section 27A of the Securities Act of 1933, as amended, and Section 21E of the Securities Exchange Act of 1934, as amended. These statements appear in a number of places in this release and include all statements that are not statements of historical fact regarding the intent, belief or current expectations of Tombstone Exploration Corporation, its directors or its officers with respect to, among other things: (i) financing plans; (ii) trends affecting its financial condition or results of operations; (iii) growth strategy and operating strategy. The words “may,” “would,” “will,” “expect,” “estimate,” “can,” “believe,” “potential” and similar expressions and variations thereof are intended to identify forward-looking statements. Investors are cautioned that any such forward- looking statements are not guarantees of future performance and involve risks and uncertainties, many of which are Tombstone Exploration Corporation’s ability to control, and actual results may differ materially from those projected in the forward-looking statements as a result of various factors. More information about the potential factors that could affect the business and financial results is and will be included in Tombstone Exploration Corporation’s filings with the Securities and Exchange Commission. 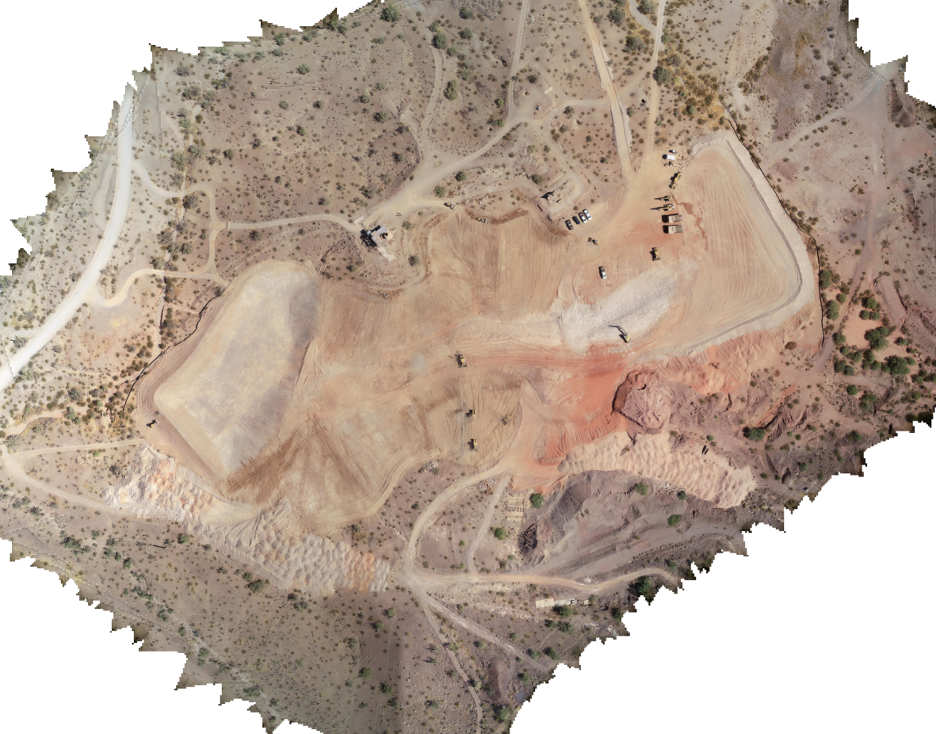 Overview of the Mine Site 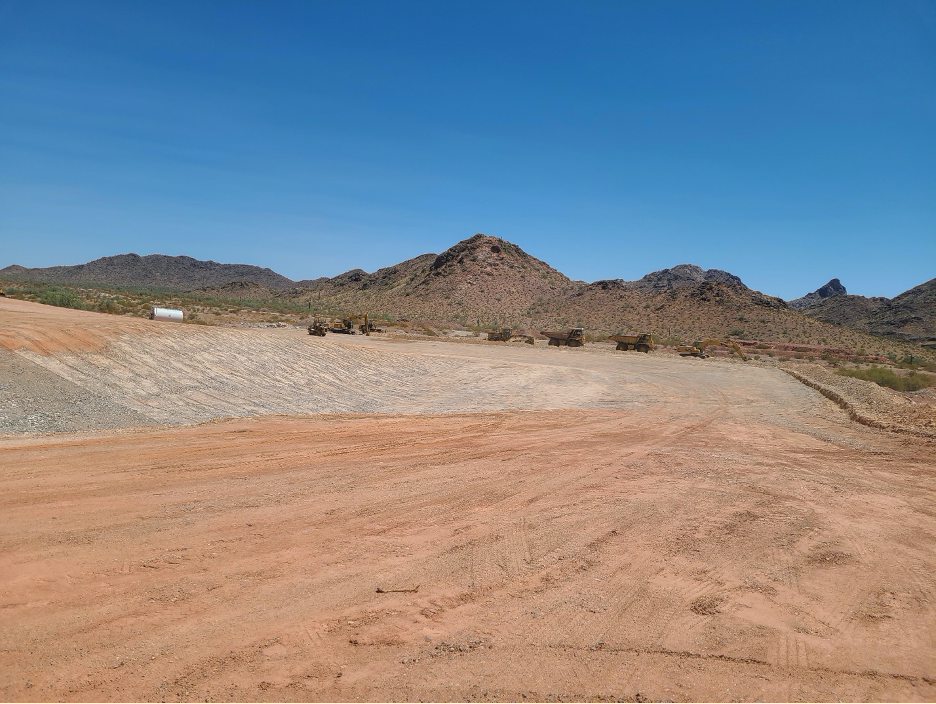 East Side of Leach Pad – Completed Compaction – Ready for Liner 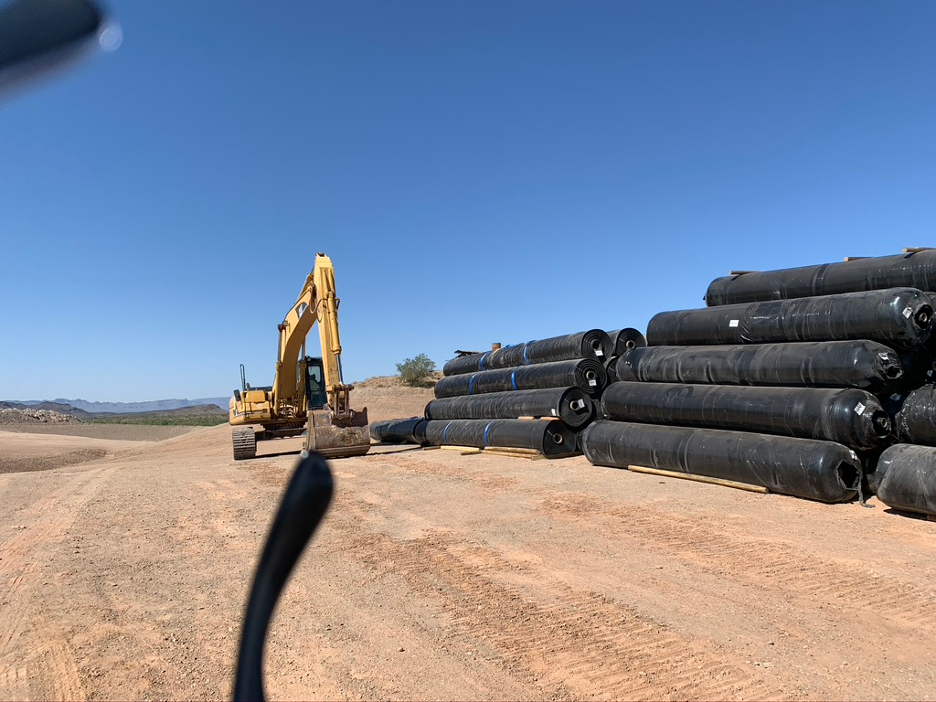